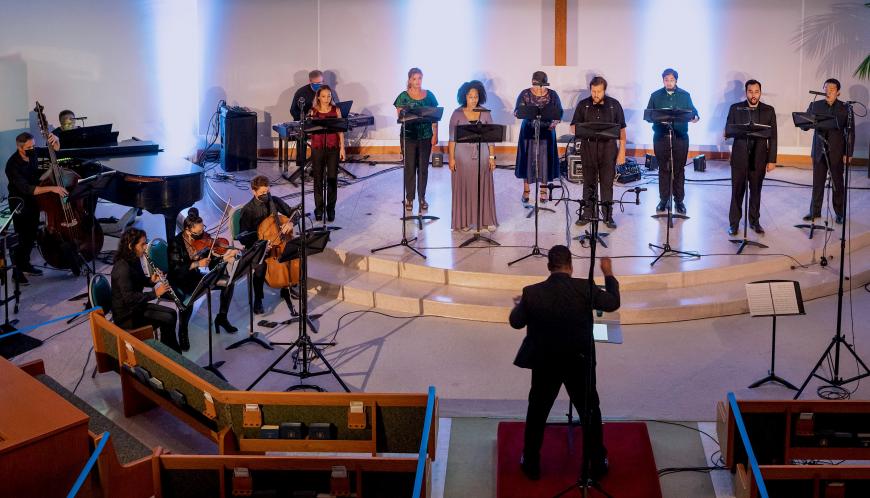 Every music organization or company has its own exit and re-entry story around the time of COVID to tell. In the case of the formidable contemporary-modern Los Angeles-based Jacaranda series, live and crowded concert operations ended abruptly in March 2020 and resumed – on another seemingly disturbing note – on September 11, 2021.

Fittingly and as expected, the program titled “Twin Towers” (additional mark point for cross reference with the opening piece by Joan Tower) landed on the 20th anniversary of September 11, with music and music. texts on September 11. From another vantage point of specific historical interest, the evening ended on a high and deep note with the 2002 West Coast premiere of Anthony Davis Restless mourning, music deserving of greater recognition.

Ironically or not, the only play here that preceded Ground-Zero was Samuel Barber’s Adagio for Strings, now a virtual 9/11 memorial hymn and an inevitable cornerstone of this Jacaranda event. He arrived, delivered with admirable restraint and slow climaxing force by the series resident Lyris Quartet. The Lyris dominated the first part of the concert, which opened on the visceral, a real Adagio deconstruction of Tower, In memory, moved by Steve Reich’s austere WTC September 11, and fenced with the Barber.

9/11 story aside, Barber’s Adagio might as well be a signature balm for the ongoing tragedy and collective wounded soul of our current pandemic era. This tailored relevance helped make the concert a cathartic event both historic and present, and suitably served by the spiritualized atmosphere of Jacaranda’s place of residence, the First Presbyterian Church in Santa Monica.

Jacaranda’s founding director Patrick Scott introduced the evening, explaining that he felt “it was important to put music into the conversation” of this historic tragedy, 20 years later. Steve Reich’s WTC September 11, written in the tenth anniversary year of 2011, literally illustrates the same idea, inserting an undulating and irregular minimalist score for string quartet with extracts from archival texts of 911 calls, emergency radio conversations and personal interviews. In WTC September 11, what seemed closer to sore bone and heart when liberated a decade ago now takes on an additional patina of historical remembrance, similar to the Reich Holocaust Different trains.

It is clear, however, that the main event here was the late revival of Anthony Davis’ four-part set to texts by Quincy Troupe, Allan Havis, and a Bible consultation with Psalms. Although written in 2002, the piece for choir, chamber ensemble, and rhythm and electronic section is now more likely to earn due credit thanks to the legitimate buzz given to the composer’s 2020 Pulitzer Prize-winning opera. . Central Park Five (premiered just down the street by the Long Beach Opera, in June 2019).

In this reflection on 9/11 with a clear prism of black experience and culture, Davis effectively draws on his natural fluidity of expressive powers from different idiomatic corners, from jazz to gospel to “classical” syntax. contemporary. Powered by a strong musicianship, with the nine-piece vocal group Toality and a cleverly equipped instrumental group dubbed the ‘Jacaranda Chamber Ensemble’, with conductor Anthony Parnther keeping the connections strained, Restless mourning made a bold and memorable impact in Santa Monica.

The texts of Troupe, “Blue” and “Things would Never, Ever Be the Same” are taken from the collection of poetry 911; An emergency call, and frighteningly convey the invigorating specifics of that horrific day and place while addressing the gnawing confusion and sense of inner chaos on this “crystal clear morning”.

In the centerpiece of the work, moving and inherently disturbing, Davis stars playwright Havis The pilot of a 767, a painful saga of the cursed pilot, in duly stirred musical terms. A bluesy waltz transforms into a reimagined tango variation, transforming into a gnarled climax and electro-acoustic mash-up around the mantra “I am the pilot of Allah”. Haunting choral clarity emerges in a coda section, as the chorus intones a wider symbolic angle on the lost pilot: “I am the pilot of innocence.”

Finally, Psalm 102 comes to a kind of emotional rescue, in a work naturally inclined towards the suspension of belief and dissonant emotional terms. Here Davis draws inspiration from the healing language of gospel and its most overt jazz references to the piece, with an ostinato riff played from the left hand of the double bass / piano to the singers and back, with a breeze of swing inflection turning into a shuffle. In the end, Davis mapped out a cautiously encouraging final, tinged with hope. Or at least a feeling of hope for the arrival of hope.

“Twin Towers” was a plate full of ideas and intentions, and a satisfying return for this important piece of musical conversation in a series.