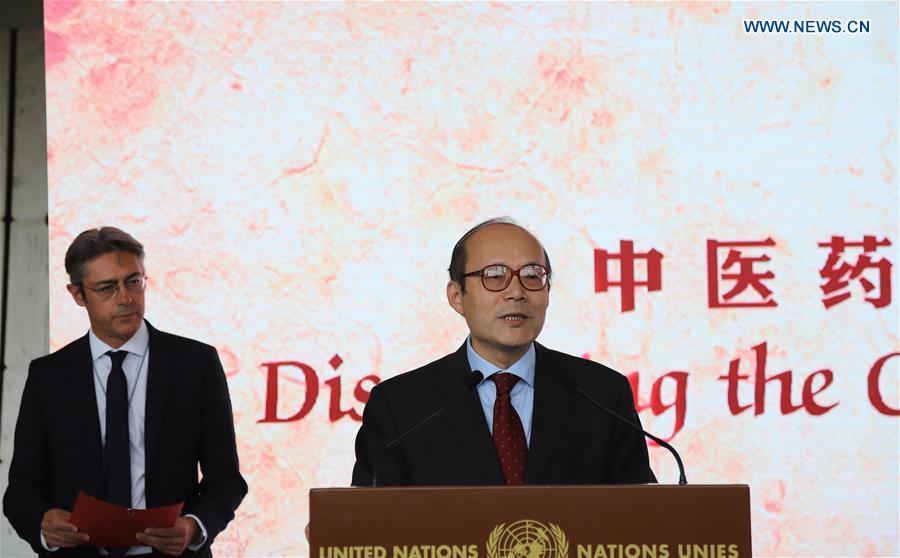 Chen Xu (right), head of the Chinese mission to the United Nations Office at Geneva, delivers a speech during the opening ceremony of an exhibition of traditional Chinese medicine (TCM) in Geneva, Switzerland, on September 24, 2019. An exhibition of traditional Chinese medicine Chinese medicine (TCM) was organized on Tuesday at the United Nations Office in Geneva (UNOG), to bring the unique part of the medical treasure of human history closer and of Chinese culture in the modern world. (Xinhua / Chen Junxia)

GENEVA, Sept. 24 (Xinhua) – A traditional Chinese medicine (TCM) exhibition was held at the United Nations Office at Geneva (UNOG) on Tuesday, to bring together the unique part of the medical treasure in the history of the humanity and Chinese culture to the modern world.

Co-organized by the Chinese Mission to UNOG and the Chinese National Administration of Traditional Chinese Medicine, the exhibition, titled â€œDiscovering Traditional Chinese Culture and Medicine,â€ did not only feature philosophy and basic principles of TCM, including ancient acupuncture and moxibustion as part of UNESCO intangible cultural heritage, but also allows visitors to interact with TCM specialists and learn about person applying TCM using modern technology.

One of the devices shown at the event, for example, was developed by the Shanghai University of Traditional Medicine to scan the user’s face, lingual coating and perform a consultation before having a report. test and a personal health plan within two minutes. The plan will have suggested daily diet and exercise. The user can then save the report to their smartphone by scanning a QR code.

In his opening speech for the exhibition, Chen Xu, head of the Chinese mission to UNOG, said that health is a common human desire and one of the top priorities of the United Nations, while TCM approaches healthcare from a holistic and dialectical perspective, and believes that the processes of the human body are linked to the environment.

“It echoes the WHO definition of health and embodies the Chinese cultural belief in the harmonious coexistence of man and nature,” Chen said, adding that “the cultural tradition that underpins it is also a source of strength for harmony and sustainable development in our world today. ”