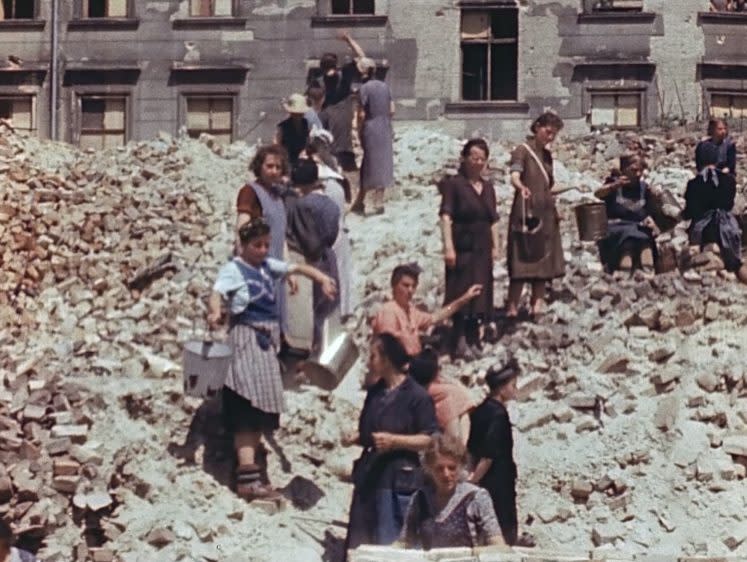 Street by street, block by block, city by city, the bombs are falling. From very high up, from the point of view of the anonymous suicide bombers – which frames a long hypnotic nocturnal sequence in Sergei Loznitsa‘s new archival documentary – kilotons of explosives fall like rain, sprouting insignificant little splashes of fire below. It’s the most obviously abstract segment of a film that most often deals with perfectly restored images of rubble and ground-level ruins, but it feels emblematic of the overall effect. Even with the roaring crescendos of Christiaan Verbeek’s deliberately intrusive and often overwhelming score, “The natural history of destructionis frustratingly equivocal, maintaining a curiously lofty distance from the horrors of the Civil War experience. His most interesting ideas fly away briefly, only to die out like distant firecrackers.

The austerity of Loznitsa’s approach is not new. Avoiding narration and letting newly unearthed footage do the talking, embellished with Vladimir Golovnitsky’s scrupulous, post-synchronized sound design, the film loosely follows the formal pattern of the Ukrainian master of non-fiction’s earlier archival material, such as ” State Funeral” and “Babi Yar. The context.” But where these films were each arranged, with astonishing determination, around a particular event – Stalin’s death services and an unsung 1941 Nazi massacre, respectively – the mandate here is more broad and vaguer Beyond the obvious that “war is hell for all civilian populations”, the points raised here simply seem too slippery to grasp.

Set primarily in black and white, with occasional color (or colorized) interludes, the film is consciously arranged to defy easy cause-and-effect inference. Although we move from German civilians frolicking in lederhosen, or chatting amiably in cafes beneath portraits of Hitler, to the bombings themselves, and thence to the smoking rubble of their aftermath, in this loose timeline, the specifics of time and of place jump . We went from a woman walking briskly past a burning pharmacy in one city, to a bombed-out Hamburg train station, to rescuers digging miserably through flattened apartment buildings in another location, before rising back into the air. This gives the film a fluttering, dreamlike pace, subtly enhanced by Golovnitsky’s soundtrack, which keeps the human chatter indistinct and low in a mix more often dominated by the hum of engines or the hum of machinery.

From time to time, we even travel across the continent to witness similar scenes of chaos in Blitzed-out London. This is a pointless attempt at balance: is there really still a significant cohort of viewers who need such equivalence to understand the basic humanity of German civilian victims of Allied air raids? This is particularly puzzling given that the book of essays by WG Sebald that inspires the film, and from which it takes its name, focused specifically on the amnesiac-only German response to the annihilation of so many of their urban centers.

Sometimes the general vagueness of the war becomes sharper. Churchill walks past Londoners waving piles of scattered bricks and masonry, and on the soundtrack intones a speech. Field Marshal Montgomery tackles the home front in a spirited manner. Goering can be seen in a convoy driving through ruined Berlin; he may be the one giving the following speech in German. But even then, these extracts were selected for their non-specificity. If we didn’t know who was speaking (and we often don’t) and in what language, it would be hard even to tell which side they were on. This is obviously Loznitsa’s point: the rhetoric of war, like its barbarism, is the same on all sides. The danger of this flattening and generalizing approach, however, is that it becomes slightly mind-numbing. One could almost fall prey to a numbness similar to that which appalled Sebald writing his essays in the first place.

Hopefully, there will soon be a time again when the refined and detached contemplation of mass warfare tactics as a tragedy experienced by all sides, regardless of ideology or politics, will be a laudable project. It’s not Loznitsa’s fault if it’s not the time. But with the country of his birth currently under the destructive force of Russian invasion in an all-too-vivid present time, such an abstract philosophy can only feel like an entertaining luxury. Newspaper headlines are routinely criticized for using grammar that condones or depersonalizes acts of violence, but this movie seems to struggle to do the same. Here, cities are razed, buildings are destroyed, babies are killed, and the who or why behind it all is cast aside. It’s a strange and disturbing irony, not least because of the very active bombardments happening daily in Europe right now, that “The Natural History of Destruction” should feel like it was written in the passive voice. .

The best of variety

Meet the “Governor” of Russia in Kherson, Ukraine