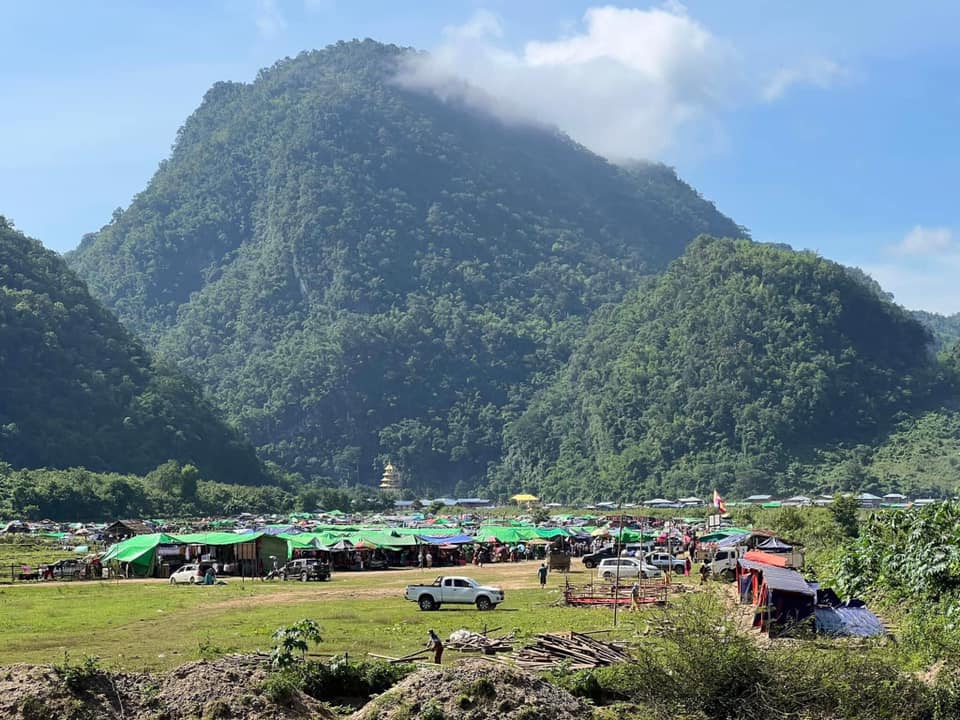 Sai Wansai – This is the second well-known solitude meditation retreat of Venerable Shan Monk Phra Khuva Boonchum which is due to end on August 1, 2022 and will reappear from Mong Kyat Cave, Shan State, that it began on April 28, 2019.

The duration of the meditation retreat has been planned for three years, three months and three days by the venerable monk.

“It is with great pleasure that we welcome our generous Dhamma friends to join us in chanting, meditating, refreshing his teaching and sharing merits in order to accumulate merits during this special time when Phra Khuva Boonchum emerges from the cave,” writes the Singapore-based Oxford Buddha Vihara.

Phra Khuva Boonchum, another notable and highly publicized meditation retreat took place in 2010, which took place in Rajagriha Cave in Ngao District, Lampang, 20 km from the Lampang-Ngao highway for a quarter and 3 years that ended on July 20. 2013.

Venerable Shan Monk Phra Khuva Boonchum is due to end on August 1, 2022 and will emerge from the Mong Kyat Shan State Cave he started on April 28, 2019.

Although these are the two best-known retreats, he has been practicing cave seclusion and meditation since he was a novice, according to a blog run by Sangha of Khuva Boonchum Buddhagaya Tai Budhagaya Temple, Bihar, India.

During the afternoon session of July 21, 2013, Khuva made a special announcement, following his emergence from Rajagriha Cave in Lampang, about his spiritual attainment: “To be honest, I have archived one level higher achievement in Buddhist practice. This is not “bragging” at all, quoting the afternoon session of Khuva Bonchum’s sermon in the Shan/Tai language. The crowd responded with “sadhu” cheers three times, according to the Shan Herald Agency for News (SHAN) report of August 17, 2013.

Thousands of people come to Mong Kyat Cave to welcome and have an audience with Phra Khuva Boonchum on August 1 when he comes out.

And as if to demonstrate his enlightenment, he correctly predicted the fate of 13 young Thai footballers trapped with their coach in the Tham Luang cave complex in Chiang Rai in July 2018, which was Thai national and international news during that time.

Khuva visited the Tham Luang cave complex in Chiang Rai on three occasions and each time held religious ceremonies and prayed for the welfare of the trapped Thai youths and their coach. Top Thai generals and officials welcomed him inside the cave, where he performed religious rites.

Apparently, the day after his second visit, the rain that had been falling in the area for days stopped. Many Thais believe the monk’s intervention caused the rain to stop suddenly.

When he left, the monk told Thai journalists: “They are all still there; they will be found in one or two days,” according to Thai media.

Finally, between July 8 and 10, 2018, as planned, the young Thais and their coach were found and rescued by an international team.

As the rescue was underway, the King of Thailand presented dresses to Phra Khuva Boonchum, Thai media reported.

Khuva visited General Maung Aye, second in command to General Than Shwe until 2011 when he visited Naypyitaw in 2018 and was also visited by Aung San Suu Kyi in 2017 during his first visit to Naypyitaw. Naypyitaw.

Thousands of people are expected to welcome and have an audience with Phra Khuva Boonchum on August 1 as he emerges from the Mong Kyat cave, according to locals.

During the Emergence of Solitude Meditation Retreat in Rajagriha Cave, Lampang, Thailand in July 2013, SHAN describes the scene as follows: “The scenario seen on this mountain range is tens of thousands of people who gather as if on a pilgrimage.Khuva honoring and welcoming ceremonies take place over two days: one on July 20 and the other on July 21. The first is to welcome Khuva Bonchum breaking his last moment of meditation without communication in solitude and the next is to renew ‘life extension’ according to the tradition of northern Thailand.

“The communities that have gathered here include Thais, Laotians, Bhutanese, Taiwanese, Singaporeans, Koreans, Japanese, Chinese, Yao, Palaung, Burmese, Shan and many other ethnicities and nationalities for the sole purpose of receiving a “blessing” from Khuva. This event although being Buddhist, other religious believers also came to visit and pay their respects. It is a truly transnational community gathering that is an unusual and amazing meeting of people from all over the world. The power of Khuva Bonchum’s dhamma has indeed touched across all national differences and borders.

The end of Khuva Boonchum’s solitude meditation in the Mong Kyat cave and his emergence from it will undoubtedly be an occasion for pilgrimage. And given the detailed preparation, according to the instructions of Khuva himself, it will be spectacular.

We can only hope that the dire state prevailing throughout the country and the animosity of the two warring Shan armies won’t drive him to such despair that he leaves the country for good.

Many harbor hopes that he can be a peacemaker to help pull the country from the brink of total collapse. But whether he will have the opportunity to do so or whether he will instead choose to abandon the prevailing hopeless situation, as he once told the two Shan armies, no one can guess.

Are you ready for a chocolate meditation?