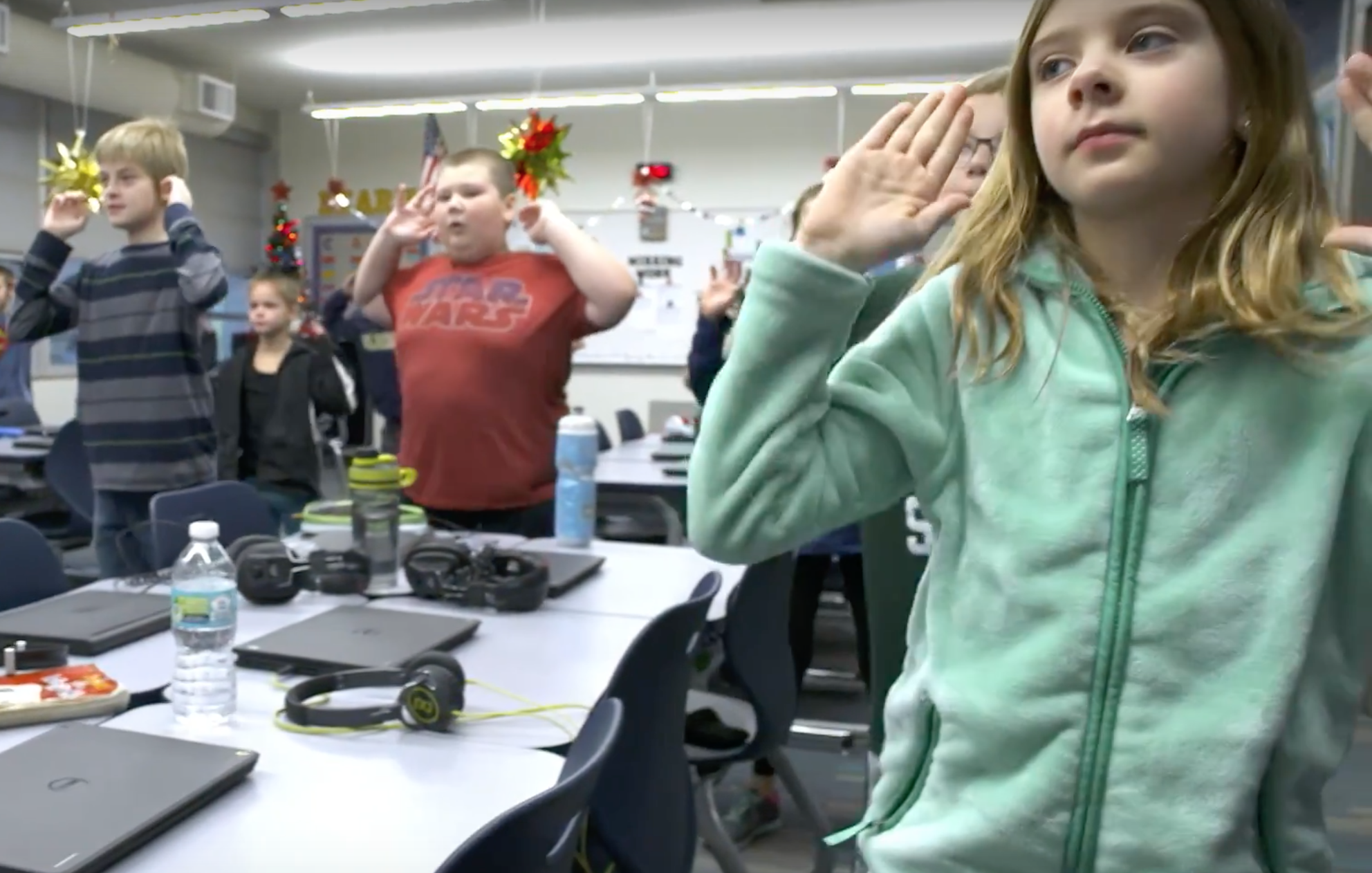 New school of thought: physical exercise in the classroom will not disrupt learning, teaching

ANN ARBOR — As childhood obesity rates rise and physical education offerings decline, elementary schools continue to look for ways to incorporate the federally mandated half hour of physical activity into the school day .

A recent series of studies from the University of Michigan found that two-minute bursts of classroom exercise breaks increased the amount of daily exercise for elementary school children without affecting math performance. More importantly, when they were integrated into classrooms in Southeast Michigan, teachers found the breaks to be doable and did not interfere with learning.

“What we are showing is that we can give children an additional 16 minutes of healthy physical activity,” said Rebecca Hasson, principal investigator and one of the principal authors.

Hasson, associate professor of kinesiology and nutritional sciences at UM, is the director of the Childhood Disparities Research Laboratory, which collaborated on five studies with the schools of public health, education, architecture and town planning in the ‘UM, and Project Healthy Schools, a Michigan community-medicine collaboration.

While 16 minutes doesn’t seem like a lot, it adds up, Hasson said. Children are expected to exercise for one hour per day, including 30 minutes during school. Most don’t.

“A lot of kids don’t get physical education every day, but they can have recess, and if they do 10 more minutes of activity there, it would meet school requirements,” Hasson said. “It doesn’t replace PE, it’s a supplement. We try to create a culture of health throughout the school day, not just in the gym. “

Studies from the Active Class Space lab looked at the effect of activity breaks on the mood, cognition, appetite, and overall physical activity of 39 children in Hasson’s lab. A study carried out in real classrooms tested the feasibility of implementing inPACT (Interrupting Prolonged sitting with ACTIVity), the exercise program developed by Hasson and colleagues.

The results show that when sitting was interrupted by high-intensity activity breaks, children kept their usual activity levels away from the lab, burning an additional 150 calories per day without overeating. Unlike adults, the children in the study did not compensate for the increased exercise by sitting after school or eating more, Hasson said.

And, after high-intensity activity, the overweight and obese children had a better mood all day, Hasson said. This suggests that the children thought about the exercise and found it more satisfying.

All of the activity breaks elicited the same level of math performance, and when Hasson took the exercise breaks in real classrooms, the teachers were able to do them.

“We had a lot of hindsight at the start. The fear was that the teachers would be overloaded, ”Hasson said. “Teachers get a lot of things thrown at them. Our experience was that the teachers were all very positive about the exercise. They know it’s good for kids. They were open to the idea, but needed more information on how to do it safely.

UM’s College of Architecture and Urbanism and School of Education, along with staff from Project Healthy Schools, helped design classrooms for exercise and for children to do exercise safely, then get back to class work quickly.

“Teachers were concerned that it would make the kids louder, but 99% of the kids were back to work within 30 seconds of activity breaks,” Hasson said. “We even had a teacher who took a break from activity in the middle of a math exam – she realized the benefit of getting them moving. “

Initially, researchers asked teachers to take 10 three-minute breaks, but most teachers average between five and six breaks, or about 15 to 18 minutes of activity. Schools in disadvantaged neighborhoods did not take as many activity breaks as schools in wealthier neighborhoods. Hasson is currently working to eliminate this disparity by adding elements of play – scoring, competition, the reward system – to increase the enjoyment of physical activity in children.

Based on these studies, Hasson said they would then try five four-minute activity breaks totaling 20 minutes, and assess the impact on mood, activity levels, calorie intake and cognition. .