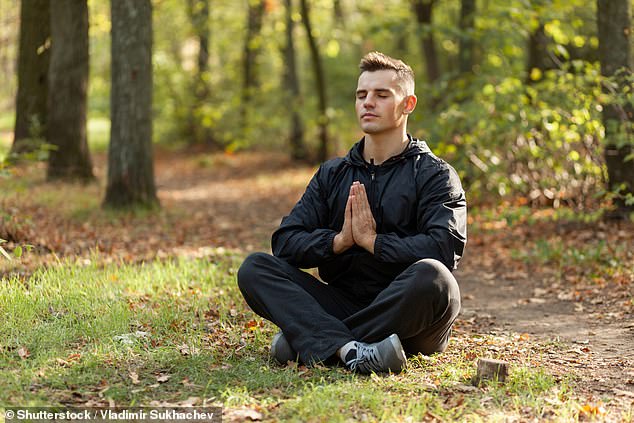 Meditation: ten minutes a day causes changes in the ability to switch between states of consciousness

Meditating for just ten minutes each day can result in marked changes in both your ability to switch between general states of consciousness and overall focus.

Evidence of these changes appeared in brain scans of ten students after just eight weeks of practice, experts at Binghamton University have found.

Of particular interest is the finding that meditation can improve connections within the brain’s â€œdorsal attention networkâ€, the team said.

The problems of this network – which is engaged when we focus on specific tasks – have previously been linked to both Alzheimer’s disease and autism.

Try this meditation technique suggested by Marina Grazier, co-founder of The Mindfulness Exchange. Make sure you are comfortable and in a quiet space, set a timer for three minutes. It will pass faster than you think.

Sit in an upright chair and close your eyes. Tune into your breathing and ask yourself, “What am I thinking about?” What feelings do I notice? What bodily sensations do I detect (for example, a stiff neck)? Â»Don’t try to change anything; just recognize those sensations and then let them go.

Focus on how it feels to breathe and how your abdomen expands when you breathe in and falls when you breathe out. Now focus on your whole body slowly moving your fingers and toes, again noting the movements you make.

The study is the result of a conversation between computer ethicist George Weinschenk and neuroimaging expert Weiying Dai, who occupy neighboring offices in the computer science department at Binghamton University in New York.

Dr Weinschenk is a long-time mediation practitioner, having studied at Namgyal Monastery in Ithaca, New York, who has ties to the Dalai Lama, the spiritual leader of the mainstream school of Tibetan Buddhism.

â€œI have developed very close friendships with several monks. I even received instructions from some of the Dalai Lama’s teachers, â€Dr Weinschenk told The Times.

â€œI took classes there, read a lot and got a three-year certificate in Buddhist studies.

When Dr Weinschenk told Professor Dai about the new meditation class he was leading, she was curious to see if the claimed benefits could be quantifiable.

‘I told Weiying [that] â€œMeditation can really have a transformative effect on the brain,â€ said Dr. Weinschenk.

â€œShe was a little skeptical, especially as to whether such a short amount of time spent learning to meditate [â€¦] would make any difference.

For their study, Dr. Weinschenk recruited ten students who enrolled in his class and, after teaching them to meditate, had them practice for 10 to 15 minutes five times a week.

One of the researchers, Dr Weinschenk, is a long-time practitioner of mediation, having studied at Namgyal Monastery in Ithaca, New York (pictured) – who has ties to the Dalai Lama, the spiritual leader of the dominant school of Tibetan Buddhism.

The comparison of the scans revealed that after learning and practicing meditation, the students acquired more connections both between and among two networks in the brain – the “default mode network” and the “attention network. dorsal “.

The former is used when the brain is awake but not particularly focused, such as when dreaming. The latter, on the other hand, engages when the brain focuses on demanding tasks.

According to the researchers, the increased brain connectivity increases both students’ abilities to switch between default mode and focus, as well as to focus more clearly once the attention network is engaged.

“Tibetans have a term for this ease of switching between states,” said Dr Weinschenk.

â€œThey call it mental flexibility, an ability that allows you to shape and mold your mind.

“They also see the goal of concentration as one of the fundamental principles of self-growth,” he explained.

Dorsal attention network problems have been linked to both Alzheimer’s disease and autism, according to Professor Dai.

“I am thinking of a study on the elderly, because this population was made up of young students,” she explained of her future research projects.

â€œI am quite convinced of the scientific basis of meditation after doing this study. “

The full results of the study were published in the journal Scientific Reports.

Alzheimer’s disease is a progressive, degenerative disease of the brain, in which the accumulation of abnormal proteins causes the death of nerve cells.

This disrupts the transmitters that carry the messages and causes the brain to shrink.

More than 5 million people have the disease in the United States, where it is the 6th leading cause of death, and more than one million Britons are affected.

As brain cells die, the functions they perform are lost.

This includes memory, orientation, and the ability to think and reason.

The progression of the disease is slow and gradual.

On average, patients live five to seven years after diagnosis, but some can live ten to 15 years.