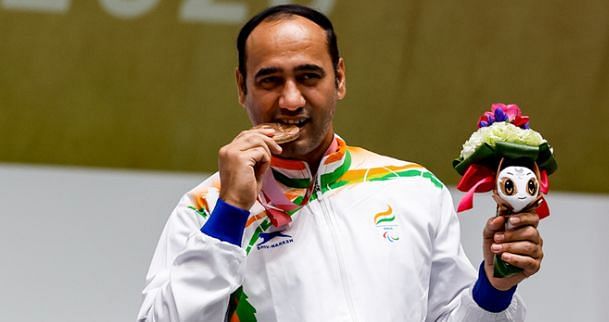 Earlier, Singhraj Adhana clocked 569 -18x points to finish 6th while compatriot Manish Narwal finished first in the qualifying round. The 39-year-old made a remarkable comeback to finish third in the SH1 10m air pistol final.

The secret behind Singhraj’s bounce is â€œmeditationâ€. Five minutes of meditation before the game helped him keep his focus intact and win a medal. Singhraj, after his bronze medal victory, told the media:

My coaches suggested that I do meditation to overcome the mistakes I made during qualifying. I did meditation for 5 minutes and it helped me … This result is due to a better team with me.

My coaches suggested that I do meditation to overcome the mistakes I made during qualifying. I did meditation for 5 minutes and it helped me … This result is due to a better team who are with me: #Paralympic Games bronze medalist shooter Singhraj Adana pic.twitter.com/FwHE4SIXFd

Singhraj started extremely well and placed him in the top 3 after his fourth attempt. He continued in first position with constant shots. Singhraj scored 9.4, 9.7, 10.4 on his 13th, 14th, 15th shot.

The competition was between Lou Xiaolong from China and Singhraj Adhana towards the end. The two shooters were competing for the bronze medal. A score of 8.7 on his 16th shot pushed Singhraj out of the medal race. He placed fourth behind Chinese shooters.

A bad streak from Lou Xiaolong put Singhraj back in the top three. After his 19th shot, the 39-year-old was again not in contention for a medal. It was Singhraj’s 20th shot that helped him win a medal.

After scoring a 20 in the penultimate playoff round, Singhraj missed second place by 0.7 points and won a bronze medal for India.

Singhraj’s life and his introduction to the sport:

Singhraj has polio and suffers from impaired limbs. His physical disability did not hinder his ability to do bigger things in life. He is originally from the city of Bahadurgarh in Haryana. Singhraj was president of the Sainik school in Faridabad. Her grandfather was part of the country’s freedom movement and served in the British Indian Army during World War II.

The Bahadurgarh shooter from Haryana started playing the sport only four years ago at the age of 35. Coming from a financially unstable background, the start was quite difficult for Singhraj at first.

Shooting is an expensive sport. Repairs are difficult for most to cope with. He came to a situation where his wife sold his jewelry to support him throughout the shoot. He walked the 40 km to the shooting range every day to train.

His endurance paid off very well as he won a bronze medal for India in the men’s 10m SH1 air pistol event at the 2021 Paralympic Games.