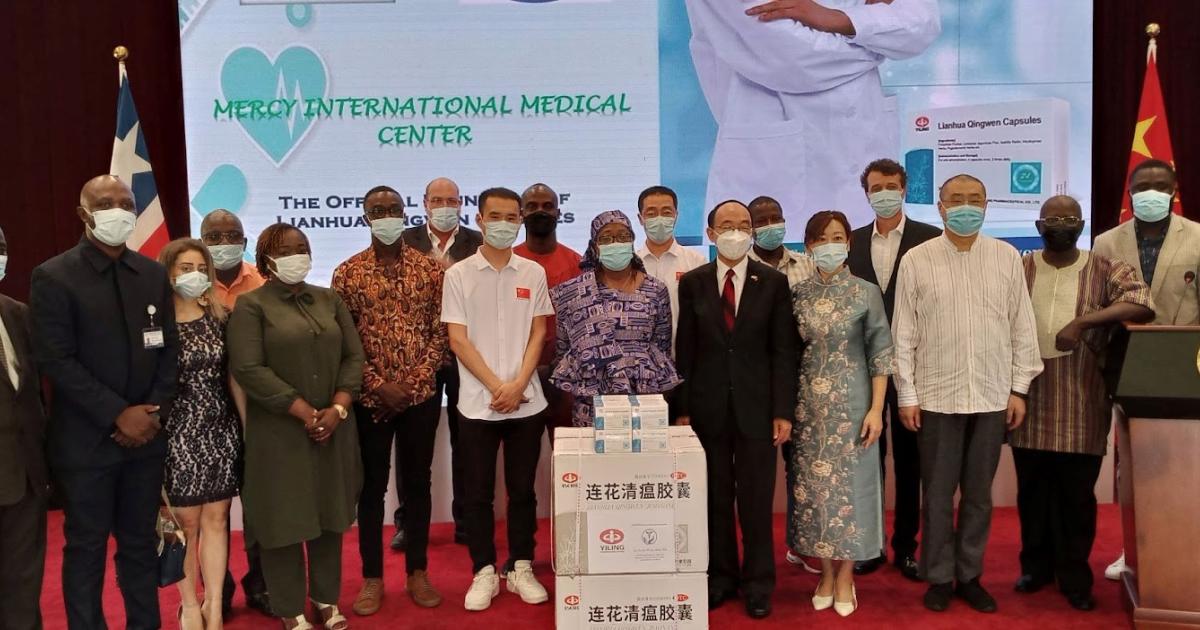 … “Lianhua Qingwen has played an important role in the global epidemic prevention and control work. So far, it has been approved to be whitelisted or selected for anti-epidemic drugs in nearly 30 countries and regions, including Kuwait, Laos, Thailand, Cambodia, Uzbekistan and 8 African countries including Liberia, Nigeria, South Africa and Kenya,” China’s Ambassador to Liberia, Ren explained.

A new capsule that can be used to treat colds, lung infections and other respiratory illnesses is on the Liberian market. A product of the People’s Republic of China, Lianhua Qingwen capsule is a Traditional Chinese Medicine (TCM) compound, developed using collateral disease theory.

Introducing the Lianhua Qingwen capsule to the public, Chinese Ambassador to Liberia Ren Yisheng said that since its launch in 2005, Lianhua Qingwen has become a typical Chinese patent medicine to respond to public health events related to infection with a respiratory virus.

According to him, traditional Chinese medicine is an original medical system that has been gradually formed and continuously enriched and developed by the Chinese nation over thousands of years of production and practice in daily life and disease control.

“Lianhua Qingwen has played an important role in the global epidemic prevention and control work. So far, it has been approved to be whitelisted or selected for anti-epidemic drugs in nearly 30 countries and regions, including Kuwait, Laos, Thailand, Cambodia, Uzbekistan and 8 African countries including Liberia, Nigeria, South Africa and Kenya,” China’s Ambassador to Liberia, Ren explained.

In Liberia, Lianhua Qingwen capsule has been approved by the Liberian Medicines and Health Products Regulatory Authority (LMHRA), after a period of rigorous testing.

In brief remarks, Liberian Health Minister Dr. Wilhelmina Jallah said LMHRA confirmed to her that the capsule product LianHua Qingwen had been cleared and ready for use in the Liberian market.

“Today we are launching this particular cold and lung medicine. When you told me about this medicine, I immediately contacted the LMHRA to check if the medicine was authorized and they confirmed ‘yes'”, Jallah said.

She noted that LianHua Qingwen capsule, traditional Chinese medicine, comes at the time when many people, especially in the rainy season, cough and sneeze, therefore, have something to help and clean the lungs and ensure that they feel better is welcome. .

The LianHua Qingwen capsule is imported by Mercy International Medical Center, a Chinese-owned healthcare provider that has been operating in Liberia for 14 years. The capsule should soon be sold without a prescription in pharmacies across the country. Capsule packs come with English instructions.

The launch of LianHua Qingwen capsules, held on August 18, coincided with the 14th anniversary of the founding of Mercy International Medical Center, which was held at the Chinese Embassy in Congo Town. Medical Director and CEO of Mercy International, Dr. Zhai Yu (popularly known as Dr. Yular), said that over the years she has successfully combined Western medicine with traditional Chinese medicine and the results of the treatment, at times, were well above expectations.

Citing a few examples, Yular said she has seen semi-paralyzed patients, following a stroke, enter her facility in wheelchairs and return home on their own after just 7 to 10 days of treatment.

“Since I started practicing medicine, I have always been patient-centred. With my deep understanding of tropical diseases, I have saved 173 critically comatose patients with cerebral malaria over the past 14 years with zero mortality. There were 1,349 trauma surgeries, 5,880 heart diseases, 247 cerebrovascular diseases, and 269 pediatric patients,” Yu said.

She said the center is always looking to find new ways to fight some of the most common diseases and that’s why when they heard that in China people were using a type of medicine to prevent and cure severe symptoms of fresh cold, flu. and influenza, they were more interested in bringing the drug to Liberia.

Yu added that over the years, Mercy International Medical Center has supported the healthcare system in Liberia, especially during the Covid19 pandemic when every medical facility in Monrovia was under high pressure, high risk and very overstretched. According to her, after a year in the new facility, they managed to improve the services and now the first ambulance service is available.

Yu said she had a dream and never stopped and after 13 years, in August 2021 Mercy International Medical Center moved to a new facility, building and equipment down the road. Boulevard, Congo Town.

In other remarks, Ren said China will continue to strengthen exchanges and cooperation with Liberia in the fields of medical care and public health, as well as actively explore cooperation in the field of traditional medicine, including herbal medicine and acupuncture.

He said China will vigorously carry out capacity building in training to help strengthen Liberia’s response to epidemic and health challenges, and improve people’s health and well-being.

“We appreciate the help and support provided by the relevant government departments in Liberia and China, and commend Yiling Pharmaceutical for their strong support and Dr. Zhai Yu, Chief Executive Officer of Liberia Mercy International Medical Center for her efforts,” Amb . noted Ren.

He said since the outbreak of Covid-19 in 2020, the Chinese government and the private sector have provided Liberia with 6 batches of anti-epidemic materials, including large quantities of drugs, medical equipment and ambulances.

“China has sent 15 medical teams to help Liberia provide medical services to the Liberian people. At present, the Chinese side is implementing the clinical diagnosis and treatment laboratory project in the 14 military hospitals in an orderly manner,” the ambassador said.

Jallah praised the cooperation between the Liberian government and the Chinese government through its embassy, ​​which she said had achieved a lot during Covid-19 and even beyond, ensuring that the best medical care was provided. to Liberians.

She also congratulated Mercy International Medical Director Yular for 14e years of service to Liberians during the country’s hard times and good times.

Meanwhile, Yular presented 800 packets of LianHua Qingwen capsules to the Ministry of Health, to help Liberians fight colds and flu. She said she believes the medicine is best suited for Liberia and pledged to work together to build a strong China-Liberia friendship and work for Liberia’s future.

The launch of the LianHua Qingwen capsule was attended by other dignitaries, including Minister of National Defence, Major General (Rtd) Daniel Ziankahn; Minister of State without Portfolio, Trokon Kpui; CEO of JFK Medical Center, Dr. Jerry Browne; a representative from the National Public Health Institute of Liberia (NPHIL); representatives of the Chinese medical team; a delegation from Military Hospital 14 and other private health professionals.