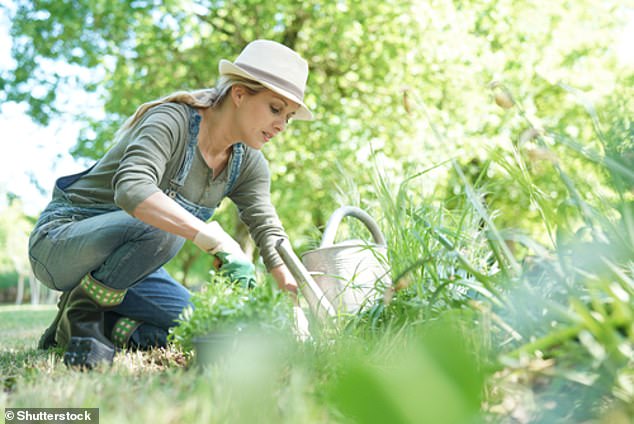 Gardening is “good for the soul” according to scientists, who say it improves happiness and emotional well-being as much as biking, walking or dining out.

The new study by researchers at Princeton University found that going out and gardening was particularly beneficial for women in low-income households.

While running or playing sports can be more physical, gardening works better as an emotional booster than other activities.

The research team says this becomes even more beneficial for those who grow their own vegetables than those who have maintained ornamental gardens.

The study of 370 volunteers in the United States involved people reporting their own level of emotional well-being using an app while undertaking a range of activities.

According to the researchers, the discovery that home gardening contributes to emotional well-being could be important if used to encourage those with small gardens to grow food rather than flowers, especially as a means of supporting areas. densely populated, researchers say.

The authors found that gardening was good for improving happiness, whether by people alone, with loved ones, or in groups.

Those who regularly tended the gardens were likely to spend more time doing so than those who participated in other activities, the authors found.

They also reported happiness levels as high as other activities and higher for women and low-income households.

Lead author Anu Ramaswami said this has implications for equality in food planning, as low-income families tend to have less access to healthy food options.

â€œGardening could bring the health benefits of fresh fruits and vegetables, promote physical activity and promote emotional well-being, which can reinforce this healthy behavior,â€ Ramaswami said.

â€œA lot more people garden than we think and it seems to be associated with higher levels of happiness, similar to walking and cycling.

â€œIn the movement to make cities more livable, gardening could play an important role in improving the quality of life.

While running or sports may put more of a physical strain, gardening works better as an emotional uplift than other activities – especially planting vegetables.

The benefits were the same across racial boundaries and between urban and suburban areas, according to co-author Graham Ambrose.

People are more fulfilled emotionally by planting vegetables than flowers

The volunteers all lived in the Minneapolis St Paul metro area and used a cell phone app called Daynamica to report their emotional well-being while participating in one of the 15 daily activities.

â€œPeople know where community gardeners garden, but it’s hard to know who is gardening at home, which our group has uniquely identified,â€ Ambrose said.

For example, the study authors found that 31% of participants did home gardening for about 90 minutes per week on average, compared to 19% who cycled and 85% walked.

â€œA lot more people garden than we think and it seems to be associated with higher levels of happiness, similar to walking and cycling,â€ Ramaswami said.

â€œIn the movement to make cities more livable, gardening could play an important role in improving the quality of life.

The researchers found that home gardening was among the top five activities in terms of importance to people when they engage in it.

The study authors now plan to replicate the study among community gardeners rather than home gardeners to see if they report a similar emotional benefit.

The results were published in the journal Landscape and Urbanism.