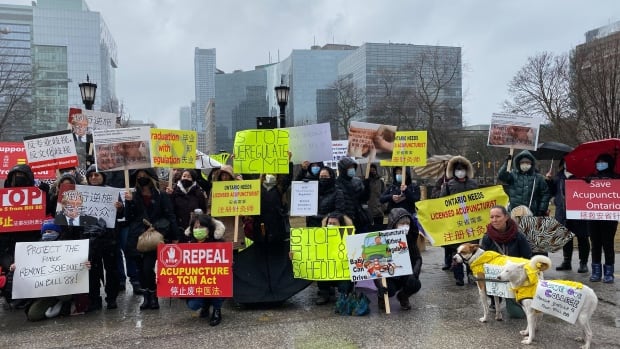 The Ontario government is repealing a controversial section of a new labor bill that would dissolve the provincial regulator of Traditional Chinese Medicine (TCM).

Premier Doug Ford defended the move last week as a way to break down language barriers for Cantonese and Mandarin speakers who couldn’t take English exams and get certified to practice.

In a statement Monday, Ministry of Health spokeswoman Alexandra Hilkene said she would instead begin working with the College of Traditional Chinese Medicine Practitioners and Acupuncturists of Ontario to offer exams for entry into Chinese languages.

“We know how important the practice of traditional Chinese medicine is to many Ontarians, which is why we intend to break down language barriers and fix this unfair system put in place by the Liberals,” said Hilkene.

The move comes as advocates for the college’s scrapping gathered for a protest outside the Legislature on Monday morning – a week after the proposed bill and nearly 40,000 signatures in a petition in support of the college were collected online.

The bill has been criticized by other political parties. Andrea Horwath, leader of the Ontario NDP and Official Opposition, tweeted that she was relieved by the change and would focus on addressing “language and accessibility barriers” if her party formed the government after the June elections.

Green Party Leader Mike Schreiner said the policy should never have been proposed in the first place.

“It shouldn’t take a backlash like this for the government to change its mind about a bad idea,” he said in a statement.

Ontario Liberal Party Leader Steven Del Duca said last week that his party would reverse the decision if elected. He was seen at the Monday morning protest celebrating the overthrow of the Ford government.

Thank you to everyone at Queen’s Park protesting Doug Ford’s reckless and dangerous decision to deregulate acupuncture & Traditional Chinese Medicine. Together, we succeeded in rolling back @fordnation ! Let’s continue to work together to make sure this doesn’t happen again. #onpoli pic.twitter.com/6GIzc4nhed

Practitioners worried that scrapping the college, which currently sets and enforces standards of practice, would put patients at risk.

Government House Leader Paul Calandra said the next version of the bill would direct the college to offer testing in Mandarin and Cantonese.

The next step, according to the head of a TCM advocacy group, is to rebuild trust between practitioners and the government.

“Trust has been shaken, but I think trust is starting to be restored and will continue to be if these dialogues continue,” said Heather Kenny, President of Traditional Chinese Medicine Ontario.

Mary Wu, president of the Toronto School of Traditional Chinese Medicine, hopes the recent focus on the industry will pave the way for other opportunities, such as creating a class of more advanced practitioners in the form of a doctor of traditional Chinese medicine, and for government funding. to make TCM more accessible to Ontarians.

“Our healthcare system is facing huge challenges,” Wu said. “And I think TCM, our profession, can help with that.”

Wu was instrumental in organizing a coalition of provincial and pan-Canadian stakeholders to save the college.

She says the rapid change they have achieved shows why greater industry unity is needed to protect and advance traditional Chinese medicine and acupuncture in Ontario.

“We fought for years to get the profession recognized,” Wu said. “Now we’re going to take another 30, 60 years to do better.”