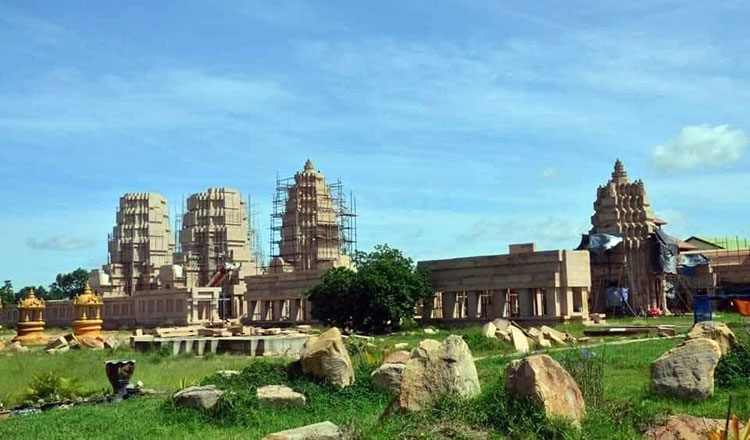 Photos of the construction in Thailand of what is perceived to be a copy of Angkor Wat sparked outrage from Cambodian Facebook users who started sharing the photos two days ago from a post from Thailand. .

The Culture Ministry said the building was called a “meditation center” located in Thailand’s Buri Ram province and that they were investigating the proximity of the design and construction of Angkor Wat before pushing to diplomatic action.

Ministry spokesman Long Ponnasirivath said Khmer time yesterday that no trace of an official design request could be found even though construction started in 2019.

However, the construction of the temple in Thailand awaits specific technical and legal research before Cambodia has any diplomatic action with the country.

He said the ministry had already contacted Thai officials to request that the construction plans be reviewed if the technical specifications are the same as those of the Angkor Wat temples and asked the Cambodian embassy in Thailand to conduct the ‘investigation.

The ministry will study the details of the construction before deciding whether legal or diplomatic action is warranted.

â€œThe ministry will not jump to conclusions because of public opinion. We must first study in detail and learn the techniques (to be used) clearly because in Thailand their temples are very similar to Cambodia. As you know, in Thailand there are hundreds of temples that look like Cambodian temples, â€Ponnasirivath said.

â€œIf the Thais build temples in the sense of heritage – in the sense of elevation – there is no problem. Cambodia is only happy, there is no anger, you just have to identify that it is in the Khmer style. It is a universal value that belongs to Cambodia, â€he said.

â€œWhen Cambodia records this heritage, it is also a world treasure. But on the other hand, regarding moral rights and property rights, if Thais copied from Cambodia, it must be clearly identified as belonging to Cambodia, according to international law. Parties wishing to build must have permission from the original owner through a letter of request, â€he said.

â€œOtherwise, if Thais build (in Khmer style) for commercial purposes, tourists will say they want to visit Angkor Wat but they don’t need to come to Cambodia because they will see it in Thailand,â€ Ponnasirivath said. . â€œIt’s a loss for Cambodia because it is a copy of Cambodia. Therefore, we must have a proper technical study of how the Thai side built the temple. “

He said: â€œIn the past the Thais have done the same thing twice, using the Bayon and Angkor Wat style to build their hotels and we have worked with Thai officials. They stopped construction.

“However, if after a study we find that the construction of the temple really resembles Angkor Wat, then we will have diplomatic action with Thailand as in the past, but we must first check certain legal conditions before acting. “They act like economic rights, they are not wrong. (If they build) in the commercial sense, we will have diplomatic action between Thailand and Cambodia,” he said.

Foreign Ministry spokesman Koy Kuong said Khmer time yesterday that after the Cambodian embassy in Bangkok has finished investigating, the ministry will send a letter through the ambassador.

Vong Sotheara, director of the Department of History and professor of Khmer and Southeast Asian inscriptions and history at the Royal University of Phnom Penh, said Khmer time yesterday that Cambodia should ask Thailand about the construction of this temple and how it looks like Angkor Wat.

â€œThe goal of our Khmer ancestors in building this temple was to make the sanctuary a place of worship. If (the Thais) rebuild the construction for a purpose other than that intended by our Khmer ancestors, we will lose the identity of Cambodia, â€he said.

â€œIt is unfortunate that the Cambodian people (for Thais) are repeating this behavior because the Angkor Wat temple is revered by Cambodians as their life – as the heart of national unity – and if Thailand does, ( Cambodia) will lose Khmer values, â€Sotheara said.

â€œAlthough Angkor Wat has been inscribed on the World Heritage List, no country in the world is building an exact replica of an original structure of the country to which it belongs. The second country, which wants to rebuild as a heritage asset, has the right to build only in part, and Cambodia should study this carefully as in the case of heritage construction, as in Bangladesh and India â€, did he declare. â€œThis is an important lesson for Cambodia.