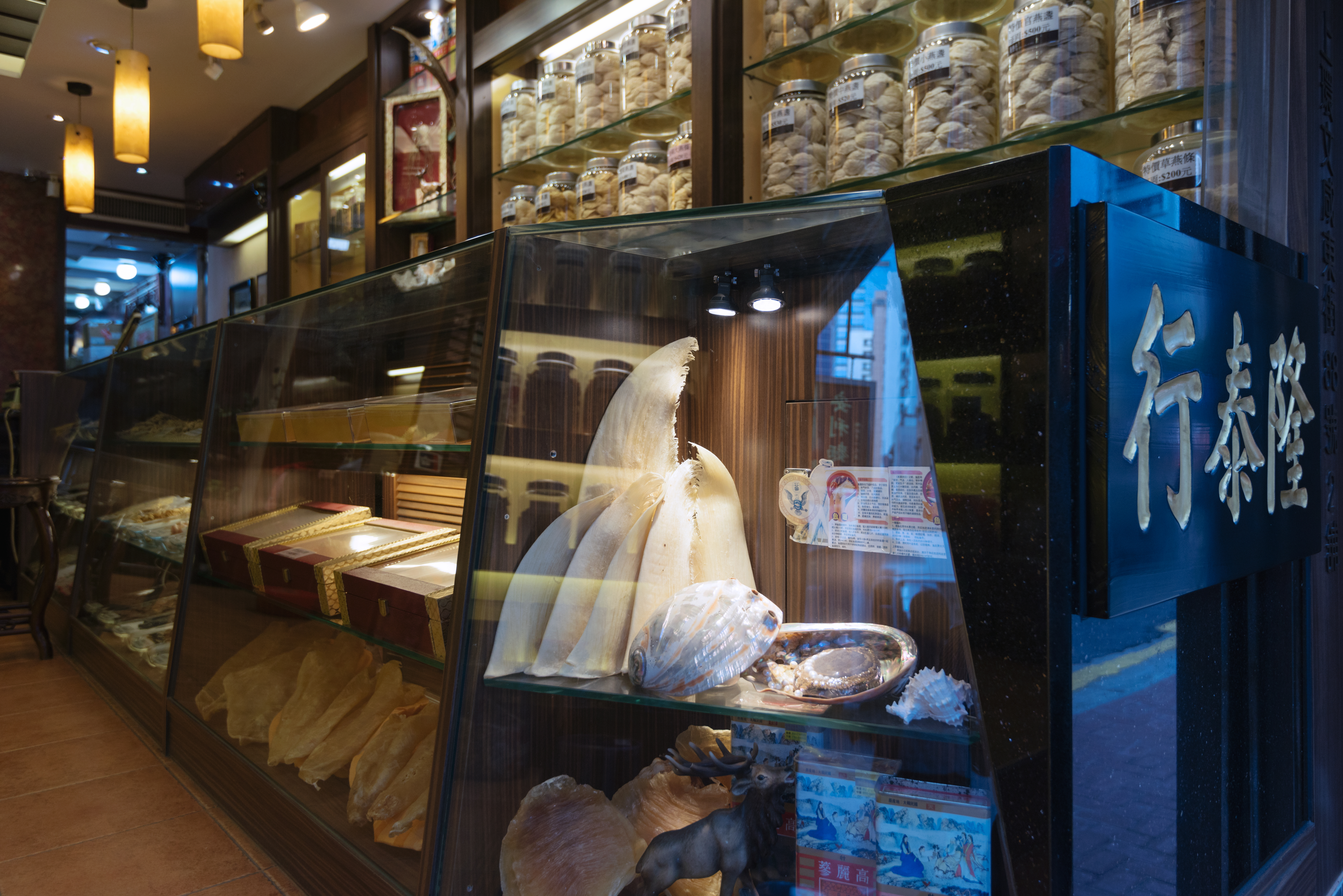 Sun Simiao was a titanic figure in the world of traditional Chinese medicine. Born at the end of the 6th century during the Tang Dynasty and enjoying a remarkable life expectancy of 101 years, he was revered in China – just as the Greek physician Hippocrates was among the practitioners of Western medicine. Sun has produced books that are among the foundational writings on Traditional Chinese Medicine, such as the one roughly translated as Essential formulas for emergencies worth a thousand gold coins.

Despite the widespread adoption of Western medicine throughout China today, the traditional methodology practiced by Sun is still an important practice for many people in China and elsewhere, sometimes helping in cases where modern treatments are insufficient.

But some of the ingredients in the remedies listed by Sun, or later adopted by traditional Chinese medicine physicians, have brought practitioners into conflict with the wildlife conservation community. The demand for products like horns has driven species like the western black rhino to extinction, while pangolin species have become the most trafficked animal in the world because of the demand for their scales and meat. Even a species of lizard once common in Southeast Asia, the tokay gecko, is harvested in such numbers for medicinal use that it is disappear from certain regions.

Meanwhile, demand for tiger parts has led to poaching across their range and even affects leopards when used as surrogate ingredients. “What we’re headed for is extinction in the wild,” says Judith Mills, author of the book Tiger blood, which details the fight to conserve big cats in the face of massive demand.

While many are quick to blame the practice of traditional Chinese medicine in general, the reality is not that simple. Some practitioners say the fault lies in misinterpretations of Sun’s original texts, as well as bad faith marketing efforts by the wild animal parts suppliers and controversial tiger farms.

By the 1980s, the supply of wild tigers (and other animals such as bears, pangolins and rhinos) whose parts are used in traditional medicine became scarce. â€œChina has started to run out of its own domestic supply of these animals,â€ Mills said.

In the face of this decline, the government and private profiteers in China have established tiger farms to meet the demand for wild animal parts both domestically and abroad. The idea was that the provision of breeding parts legally would decrease the demand for wild products supplied by poachers.

But for various reasons, Mills says, the plan didn’t work out exactly as planned. For starters, the widespread availability of legal parts only increased demand, which then spilled over to black market parts of the market.

Some people believe these wild parts are actually more effective as medicine, according to surveys in five major cities in China by Mahendra Shrestha, program director of the Tiger Conservation Partnership at the Smithsonian Conservation Biology Institute, and others. â€œVarious sources have shown that there is still a huge demand on the wild population because people prefer products from nature over those from captivity,â€ he says.

Moreover, as the average salary of the Chinese citizen has increased, more and more people can afford the types of products that were previously only available to the elite. This increase in demand has also boosted demand for wildlife products that cannot be grown, such as those from pangolins or rhinos.

Poaching occurs in many parts of the world for a variety of reasons. Elephant ivory is valued as a luxury material, for example, while other animals may be valued for their bushmeat. Taken together, this practice presents serious challenges for environmentalists. But the demand for traditional Chinese medicine is often driven by people who care about the health and livelihoods of their loved ones. When children suffer from illnesses that cannot be cured by Western medicine, desperate parents will do anything to find potential solutions.

Some traditional medicine practitioners say, however, that these uses are wrong in the first place. Lixing Lao, professor and president of the University of Integrative Medicine of Virginia, prefers to draw inspiration from the original texts written by Sun Simiao nearly 1,500 years ago. Sun wrote that animal parts can sometimes be used to save lives – with the caveat that those parts should only come from animals that have died of natural causes.

â€œIf you kill another life to save ours, it goes against the principle of Chinese medicine,â€ Lao said, adding that later in his career, Sun completely disowned the use of animal parts. Many Sun disease remedies have multiple options listed as ingredients. Botanicals can often serve the same function, so there’s no need to look to rhino horns or tiger bones. â€œChinese medicine has been practiced for many years, but if you look at the literature, animal parts are only a small part,â€ says Lao.

In other cases, Lao says, business operations divert the original revenue from profit, marketing new types of products as substitutes for wealthy people in search of miracle cures. â€œThey exaggerate a lot of things; it makes it worse, â€he says. Traditional texts might have recommended the use of scales from Chinese pangolin species in some cases. But now that these animals are almost extinct in the wild, vendors claim that the scales of African pangolin species have the same functions. In some cases, traders even promote the consumption of pangolin meat for health purposes, which has never been part of mainstream medicine. â€œAfrican pangolin species are different from Chinese, but they don’t care,â€ Lao says.

Shrestha adds that the prices have become so high that leopard and even lion parts are now sometimes replaced with tiger bones. This has contributed to a huge increase in demand, eliminating the populations of Leopards of Indochina in Southeast Asia, for example.

Mills sees the situation as particularly grim given the amount of money involved and the desperation of those seeking potential treatments. â€œWe’re talking about a lot of money here, and also about national pride,â€ she said.

Some Westerners may scoff at the idea that any of these practices work in the first place, but this is also incorrect – some traditional remedies work. Bear bile works as a treatment for certain liver diseases, for example, although synthetic substitutes for these wildlife products are available.

But the practice of Western medicine can also pose a threat to certain types of wildlife. Horseshoe crabs, for example, are harvested in great numbers in Delaware Bay for an essential ingredient they contain which is widely used in a number of medicines, including COVID-19 vaccines. These crabs are in decline – in part because of this harvest – and their loss impacts a whole flock of migratory birds that feed on crab eggs, such as red knots.

And Lao and Mills both say there is hope in the younger Chinese generation, many of whom are showing signs of growing awareness and concern for conservation issues. Lao has worked with some ingredient suppliers who have pledged not to use illegal products from poachers.

Lishu Li, who works with the Wildlife Conservation Society’s China program, says the young and educated population in China is significantly more concerned about these issues. But gaps remain between popular perception and actual decision-making. She says if product makers were forced to display the provenance of ingredients, the resulting transparency could help reduce demand for wildlife parts. â€œSometimes many consumers and doctors are unaware that these animal parts come from endangered species or lack awareness. [that the endangered status] of these species are linked to their medical use, â€says Li.

She also notes that the government has recently paid a lot of attention to environmental protection, not only in China, but also abroad. The government has also tightened protections for some species, such as pangolins and tokay geckos. But overall, she says, conservation efforts still face a general lack of awareness among the general public. In the end, Li said environmentalists and traditional medicine practitioners had better work together: â€œToo many controversial points of the finger, too few proposed solutions. “

Meditation, exercise are ways to cope with stress during COVID-19 return to normal