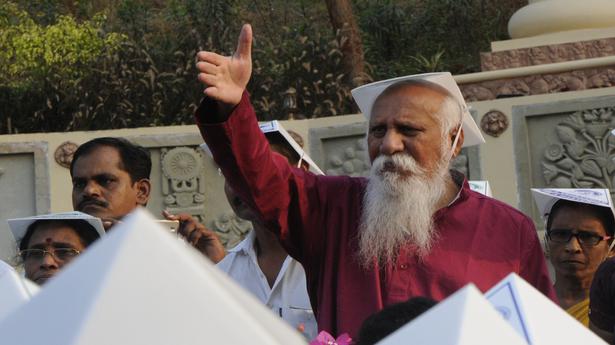 Popularly referred to as ‘Patriji’ by his followers, he established the Kurnool Spiritual Society in 1990. He popularized pyramid meditation by building the first pyramid at Kurnool and another at Uravakonda in Anantapur district later.

Born in Shakkar Nagar in Nizamabad district of Telangana in 1947, Subhash Patri completed his graduate studies in soil science from the University of Agriculture in 1974 and worked for a multinational fertilizer company.

Subhash Patri was treated in Bengaluru for some time for kidney ailments and later transferred to Kadtal. His last rites were performed in Kadtal on Monday July 25.

Subhash Patri married Swarnamala Siriguri in 1974 and they have two daughters, Parinitha and Parimala. He became enlightened in 1979 after doing some meditation experiments. Controversies also dogged him for some time, with several women connected to him accusing him of assault.

Subhash Patri created the Kurnool Spiritual Society with the aim of bringing everyone’s attention to the science of meditation and its crucial role in improving physical, mental and intellectual health and well-being. In Kurnool he built the first pyramid in 1991 and the second in Uravakonda in 1996.